You can find on this page the Israel geographical map to print and to download in PDF. The Israel geographic map presents the topography, elevation, rivers, mountains, climate and physical features of Israel in Asia.
The country of Israel is positioned along a fault line where tectonic forces are tearing the African crustal shell apart, producing the earth largest and deepest rift as its shown in Israel geography map. 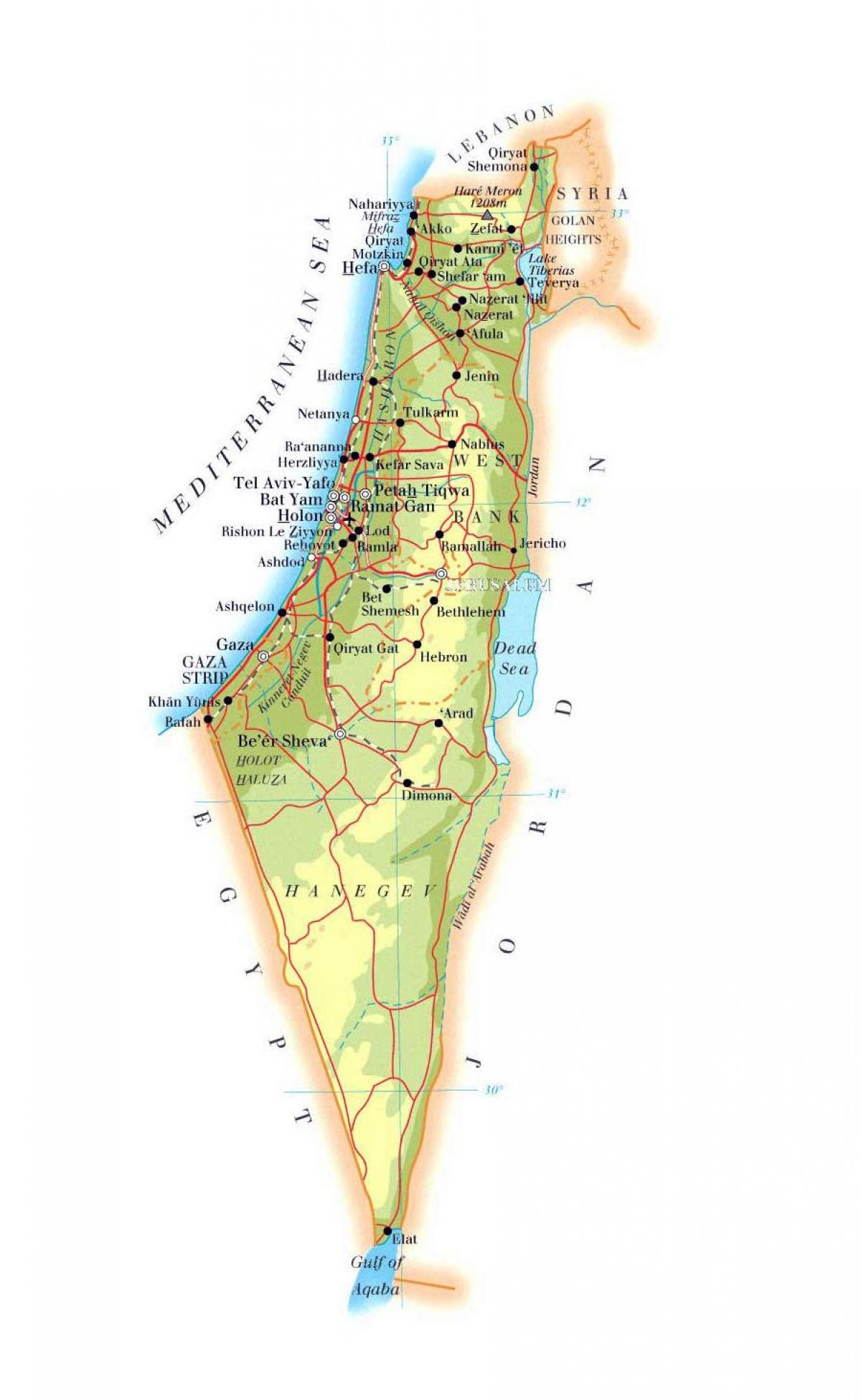 Despite its small size, about 290 miles (470 km) north-to-south and 85 miles (135 km) east-to-west at its widest point, Israel has four geographic regions as its mentioned in Israel physical map—the Mediterranean coastal plain, the hill regions of northern and central Israel, the Great Rift Valley, and the Negev—and a wide range of unique physical features and microclimates.

The coastal plain is a narrow strip about 115 miles (185 km) long that widens to about 25 miles (40 km) in the south as you can see in Israel physical map. A sandy shoreline with many beaches borders the Mediterranean coast. Inland to the east, fertile farmland is giving way to growing agricultural settlements and the cities of Tel Aviv and Haifa and their suburbs.

Israel has four major land regions as its shown in Israel physical map. The Coastal Plains, The Rift Valley, Judeo-Galilean Highlands, and the Negev Desert. Most of the Israeli's live in the Coastal Plains area, and most of the lands agriculture and industries are located in this land-form. The desert is mostly used for grazing because it rarely rains so it cannot support crops. 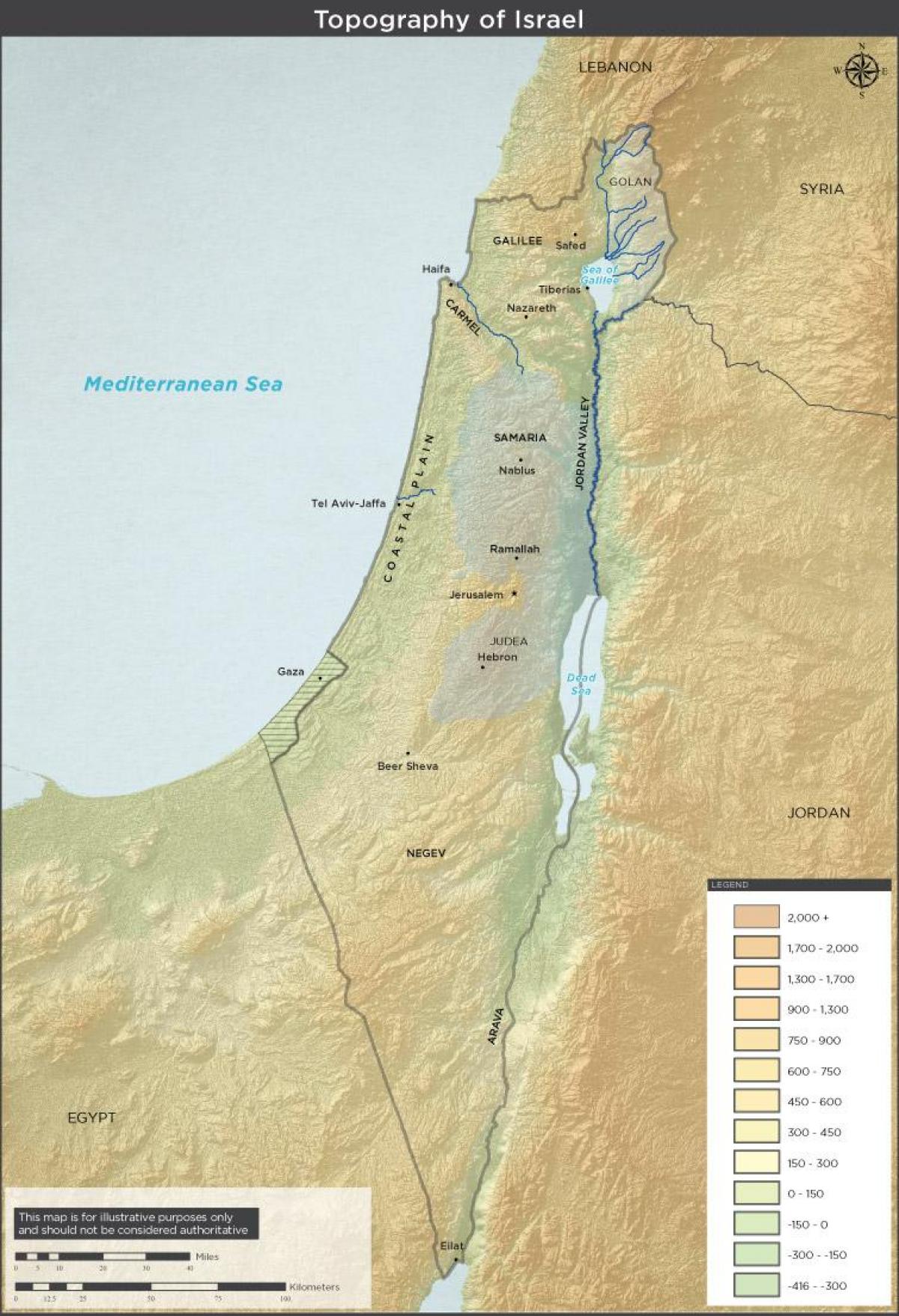 Israel is a small country with a relatively diverse topography, consisting of a lengthy coastal plain, highlands in the north and central regions, and the Negev desert in the south as its mentioned in Israel topographic map. Running the length of the country from north to south along its eastern border is the northern terminus of the Great Rift Valley.

The Negev Desert comprises approximately 12,000 square kilometers, more than half of Israel total land area as you can see in Israel topographic map. Geographically it is an extension of the Sinai Desert, forming a rough triangle with its base in the north near Beersheba (also seen as Beersheva), the Dead Sea, and the southern Judean Hills, and it has its apex in the southern tip of the country at Elat. Topographically, it parallels the other regions of the country, with lowlands in the west, hills in the central portion, and the Nahal HaArava as its eastern border.

Israel topography map of central and Northern regions of Israel mention that the Jezreel Valley separates the Northern Galilee region from the Central mountains range. The Jordan river connects the Sea of Galilee to the Dead Sea. Altitude numbers shown are in meters. The lowest point on earth is the surface of the Dead Sea (in Hebrew: "Salt Sea") that is about 400 m below sea level. 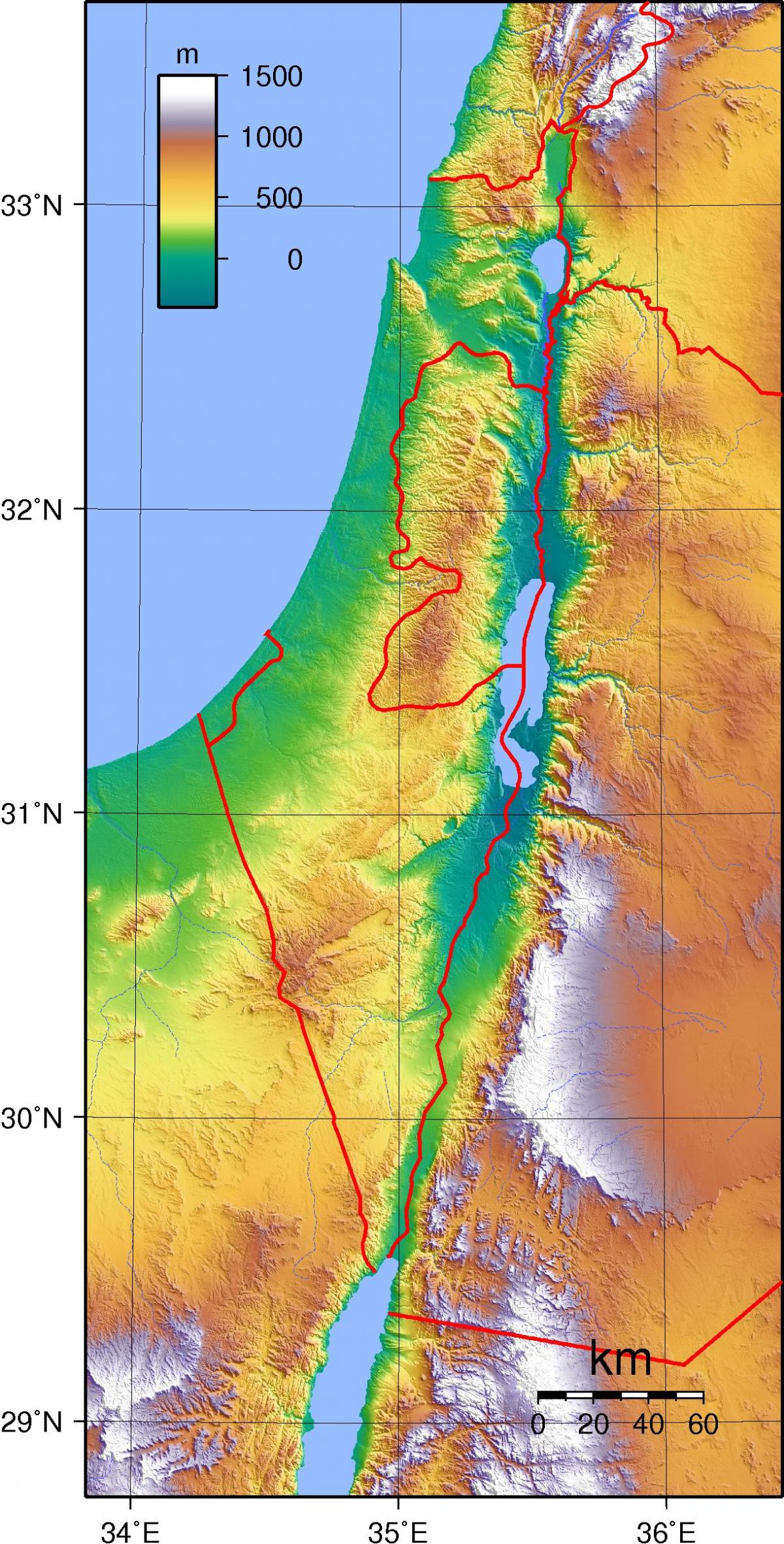 In the north of the country, the mountains of Galilee constitute the highest part of Israel, reaching an elevation of 3,963 feet (1,208 metres) at Mount Meron (Arabic: Jebel Jarmaq) as you can see in Israel elevation map. These mountains terminate to the east in an escarpment overlooking the Great Rift Valley. Mount Meron, Israel highest point in its pre-1967 boundaries, is 2 miles (3 km) northwest.

The Jordan River, which marks part of the frontier between Israel and Jordan, flows southward through the rift from Dan on Israel’s northern frontier, where it is 500 elevation feet (152 metres) above sea level as its shown in Israel elevation map, first into the Ḥula Valley (Hebrew: ʿEmeq HaḤula), then into the freshwater Lake Tiberias, also known as the Sea of Galilee (Hebrew: Yam Kinneret), which lies 686 feet (209 metres) below sea level.

The hill region, averaging 610 m (2,000 ft) in elevation, reaches its highest point at Mt. Meron (1,208 m/3,963 ft) as you can see in Israel elevation map. South of the Judean hills, the Negev desert, marked by cliffs and craters and covering about half the total area of Israel proper, extends down to the Gulf of Aqaba on the Red Sea. The Jordan River, forming the border between Israel (including the West Bank) and Jordan, links the only bodies of water in the country: the Sea of Galilee (Yam Kinneret) and the heavily saline Dead Sea (Yam ha-Melah), which, at 408 m (1,339 ft) below sea level, is the lowest point on the earth's surface. 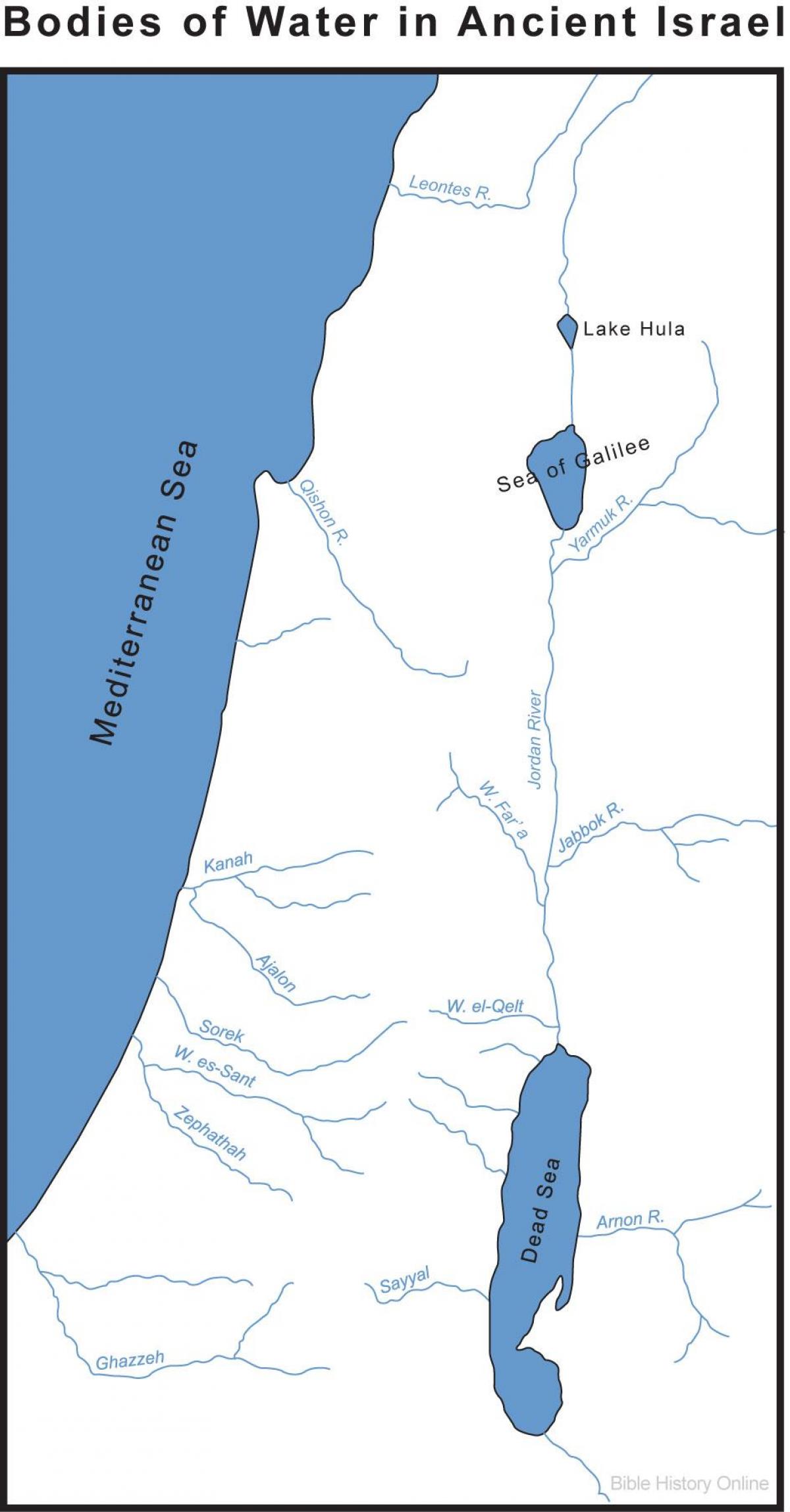 The rivers in Israel map shows the principal rivers with their names of Israel. The rivers map of Israel will allow you to find the main rivers which flow in and through Israel in Asia. The Israel rivers map is downloadable in PDF, printable and free.

The principal drainage system comprises Lake Tiberias and the Jordan River. Other rivers in Israel as its shown in Israel rivers map are the Yarqon, which empties into the Mediterranean near Tel Aviv; the Qishon, which runs through the western part of the Plain of Esdraelon to drain into the Mediterranean at Haifa; and a small section of the Yarmūk, a tributary of the Jordan that flows west along the Syria-Jordan border.

Most of the country of Israel remaining streams are ephemeral and flow seasonally as wadis. The rivers are supplemented by a spring-fed underground water table that is tapped by wells (see Israel rivers map). Israel has a chronic water shortage, and its hydraulic resources are fully utilized: about three-fourths for irrigation and the remainder for industrial and household water use.

Israel major rivers as youcan see in Israel rivers map are the Jordan, Qishon, Yarqon, and Yarmuk. Most of the other waterways are seasonal streams called wadis. They flow for part of the year and dry up for the rest. The Jordan River forms part of the country’s eastern border, dividing Israel and the West Bank from Jordan. The river meanders generally southward through the Great Rift Valley. It flows from the Hula Valley through Lake Tiberias and the central Jordan Valley to the Dead Sea. 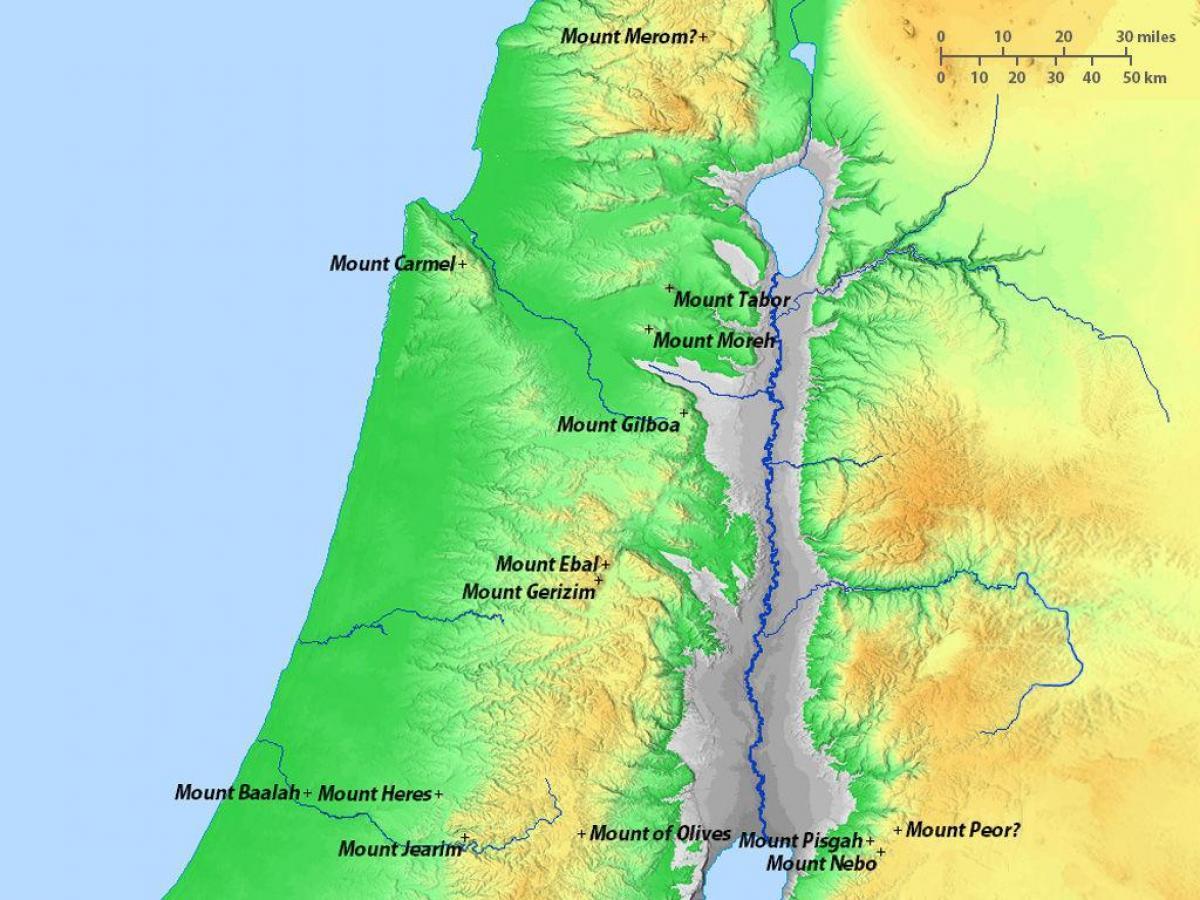 The Harei Eilat, or Eilat Mountains as its shown in Israel mountains map, offer some of the most breathtaking views and spectacular desert routes in all of Israel. This large mountain range is located just miles north of Israel most southern city, Eilat. Known for its stunning beauty, hikers and adventurers marvel at the rich yellow, red and brown colors of the mountain rocky landscape.

The mountains of Galilee as its mentioned in Israel mountains map are separated from the hills of the Israeli-occupied West Bank to the south by the fertile Plain of Esdraelon (Hebrew: ʿEmeq Yizreʿel), which, running approximately northwest to southeast, connects the coastal plain with the Great Rift Valley. The Mount Carmel range, which culminates in a peak 1,791 feet (546 metres) high, forms a spur reaching northwest from the highlands of the West Bank, cutting almost to the coast of Haifa.

Bental is an extinct volcano. It is a part of the volcano rim together with the Avital mountain south of it, together they form the crater which has a horseshoe shape with a southern opening that was caused by the lava flow. In the center of the Lower Galilee, Mount Tabor as you can see in Israel mountains map rises prominently above the surrounding valleys. Its commanding height relative to its surroundings made it an interesting point that brought to its summit warlords and prophets, who have created fascinating history spanning over thousands of years. 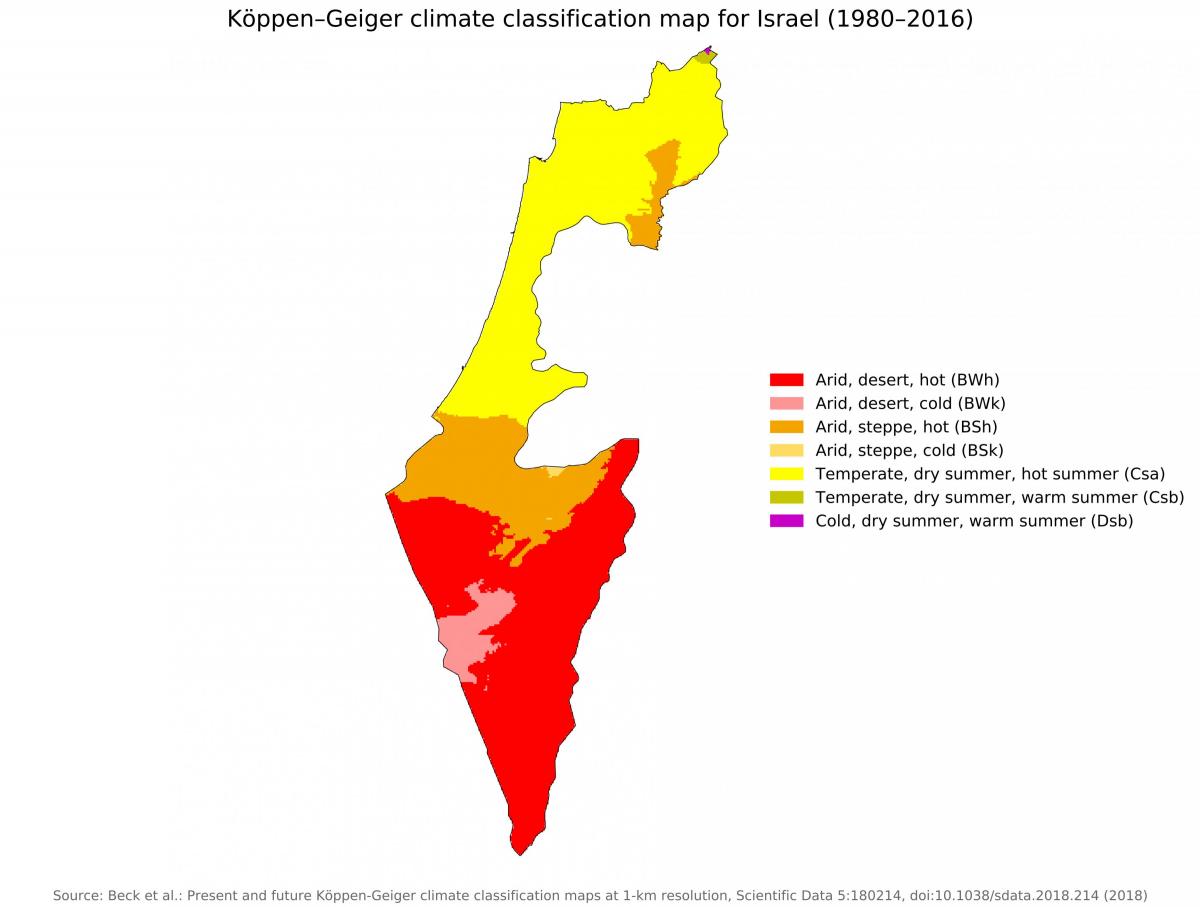 Israel has a wide variety of climatic conditions, caused mainly by the country diverse topography. There are two distinct seasons as its shown in Israel climate map: a cool, rainy winter (October–April) and a dry, hot summer (May–September). Along the coast, sea breezes have a moderating influence in summer, and the Mediterranean beaches are popular.

Precipitation is light in the south, amounting to about 1 inch (25 mm) per year in the ʿArava Valley south of the Dead Sea, while in the north it is relatively heavy, up to 44 inches (1,120 mm) a year in the Upper Galilee region as its mentioned in Israel climate map. In the large cities, along the coastal plain, annual rainfall averages about 20 inches (508 mm) per year. Precipitation occurs on about 60 days during the year, spread over the rainy season. Severe summer water shortages ensue in years when the rains come late or rainfall totals are less than normal.

Average annual temperatures as you can see in Israel climate map vary throughout Israel based on elevation and location, with the coastal areas adjacent to the Mediterranean Sea having milder temperatures—ranging from about 84 °F (29 °C) in August to about 61 °F (16 °C) in January—and higher rates of humidity than areas inland, especially during the winter. Likewise, higher elevations, such as Upper Galilee, have cool nights, even in summer, and occasional snows in the winter.